In 63 BC, Pompey conquers Jerusalem and the city is sacked. The conqueror goes to the Temple to seize the treasure of Solomon and massacres the priests there. He discovers that the treasure is nothing but a collection of scrolls of the Torah. These he holds over a fire until an old priest reaches for them imploringly. Pompey relents and hands them to the old man. 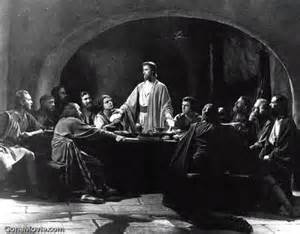 Many years later, a series of rebellions break out against the authority of Rome, so the Romans crucify many of the leaders and place Herod the Great on the throne of Judea.

At the end of the century, a carpenter named Joseph and his wife Mary, who is about to give birth, arrive in Bethlehem for the census. Not having found accommodation for the night, they take refuge in a stable, where the child, Jesus, is born. The shepherds, who have followed the Magi from the East, gather to worship him. However, Herod, informed of the birth of a child-king, orders the centurion Lucius and his men to go to Bethlehem and kill all the newborn male children.

Mary and Joseph flee to Egypt with the child. Herod dies, killed by his son Herod Antipas, who then takes power. In Nazareth, Jesus, who is now twelve years old, is working with Joseph when soldiers arrive under the command of Lucius, who realizes that Jesus escaped the massacre of the infants. But he does nothing and only asks that Mary and Joseph register their son’s birth.

Pilate and Herod Antipas meet on the banks of the River Jordan, where John the Baptist preaches to the crowds. Jesus arrives here, now 30 years of age. He is baptized by John, who recognizes that Jesus is the Messiah. Jesus goes into the desert, where the temptations by Satan occur. After forty days, Jesus travels to Galilee, where he recruits his Apostles.

In Jerusalem, Herod arrests John the Baptist, who is visited by Jesus in prison. Judas leaves the rebel Barabbas and joins the Apostles. Jesus begins to preach and gather crowds, among which are Claudia, Pilate’s wife, and Lucius. Herod beheads John on a whim of his stepdaughter, Salome.

Herod, Pilate and the High Priest Caiaphas are terrorized by the works and miracles of Jesus. Barabbas plots a revolt in Jerusalem, during which time Jesus enters triumphantly into the holy city and goes to the Temple to preach. The rebels storm the Antonia Fortress, but the legions of Pilate become involved and crush the revolt, causing hundreds of casualties. Barabbas is arrested.

Jesus meets the disciples on the evening of Thursday, having supper one last time with them and after goes to pray at Gethsemane. In the meantime, Judas wants Jesus to free Judea from the Romans and to force his hand delivers him to the Jewish authorities. Jesus is brought before Caiaphas and then to Pilate. Pilate starts the trial, then sends him to Herod Antipas, who, in turn, sends him back.

Pilate is infuriated by Antipas’s returning of Jesus and commands his soldiers to scourge him. The people demand the release of Barabbas and Pilate bows to their pressure and sentences Jesus to be crucified. Jesus, wearing a crown of thorns on his head, carries his cross to Golgotha where he is crucified with two thieves, one of them the Penitent thief Dismas.

Desperate because he has betrayed Jesus to his death, Judas hangs himself and his body is found by Barabbas. Jesus dies in front of his mother, the apostle John, a few soldiers, and Claudia (Pilate’s wife) and Lucius (who utters the fateful words: “He is truly the Christ”). His body is taken down from the cross and is carried to a rock tomb. Two days later, Mary Magdalene finds the tomb empty, and encounters the Risen Jesus.

The film ends on the shores of Lake Tiberias when Jesus appears to the Apostles and tells them to bring his message to the ends of the world. Only his shadow is visible, forming the shape of a cross where it falls on the stretched-out fishing nets, as the screen fades to black.